The GoPro Hero 9 Black is the most important action camera of 2020. It’s the follow-up to the Hero 8 Black, and is GoPro’s latest effort to maintain its lead over companies like Insta360 and DJI.

Does it? Yep, pretty much, although the price hike to £429 is daunting. The Hero 9 Black costs almost as much as the 1-inch sensor version of the Insta360 One R.

Changes for this generation include dual screens, some tweaks to the already incredible stabilisation and a rise in max resolution from 4K to 5K.

Worth the upgrade? Probably not for Hero 8 Black owners unless you’re desperate for the vlog-friendly screen. There’s no improvement to low-light video and 4K resolution is still where it’s at for the vast majority of GoPro jobs.

However, if you’ll use your GoPro a lot, this is the one to get. 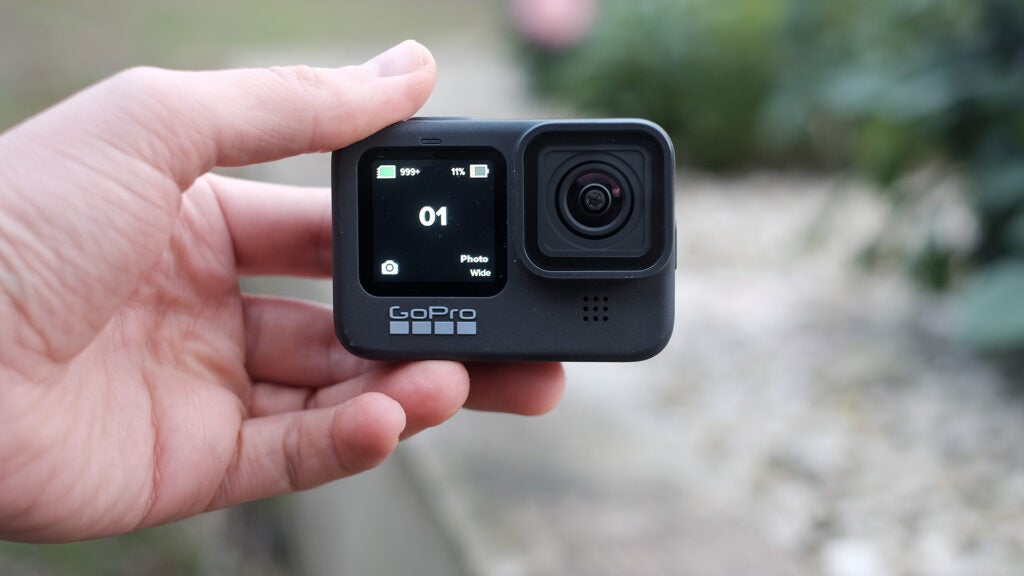 The GoPro Hero 9 Black is significantly larger than the Hero 8 Black. It was the first thing I noticed after opening the box.

This, obviously, means you can’t use your current diving housing for the new model, if you have one. However it’s not so large the use cases change. GoPro Blacks have simply looked the same for so long, any change seems momentous. 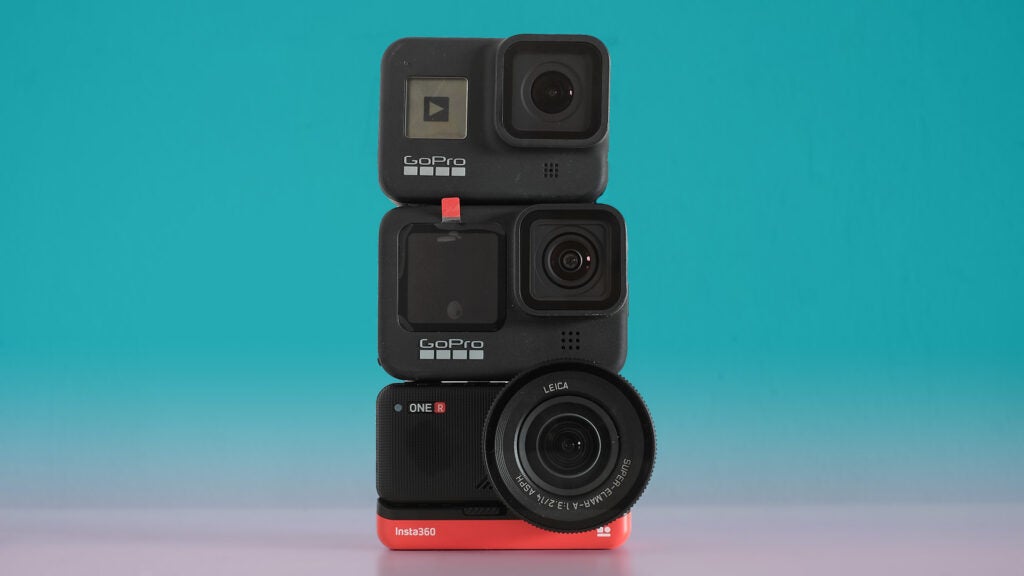 GoPro has also fixed the one part I categorically didn’t like about the Hero 8 Black. The lens covering is once again replaceable. This makes the camera a true abuse-ready workhorse. As in older GoPros, you twist the outer lens housing to remove it.

This also allows for ND filter accessories and a new “mod” attachment for the GoPro Hero 9 Black that increases the field of view to 155 degrees, by effectively sticking an extra lens element up front. It’s a neat idea and enables the “unbreakable” stabilisation feature of the 360-degree GoPro Max, if not exactly a cheap add-on at £90.

Water resistance sticks at 10m (33ft), which means most of us won’t need to use a diver’s case too often, if ever. GoPro continues to use the flip-out lens mount fingers, further reducing the real-world impact of the larger size. 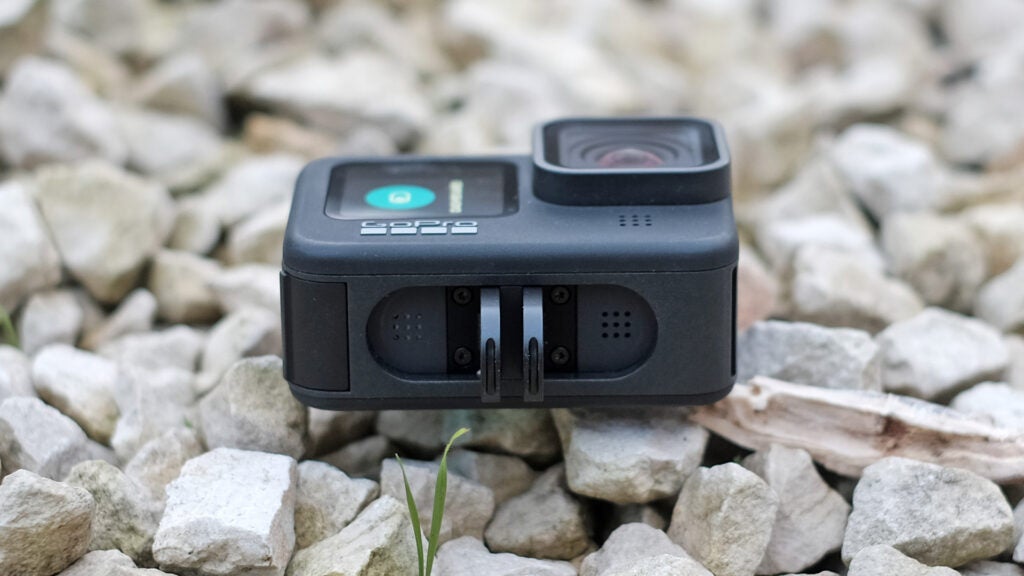 The GoPro Hero 9 Black has a widescreen rear display and a square front one. They are both excellent, and a major relief having come from using the tiny-screened Insta360 One R for weeks.

Its rear screen measures 2.27 inches across, the front screen 1.4 inches. Not only do you get an extra display, the one on the back is significantly larger than last time, up from 1.95 inches. 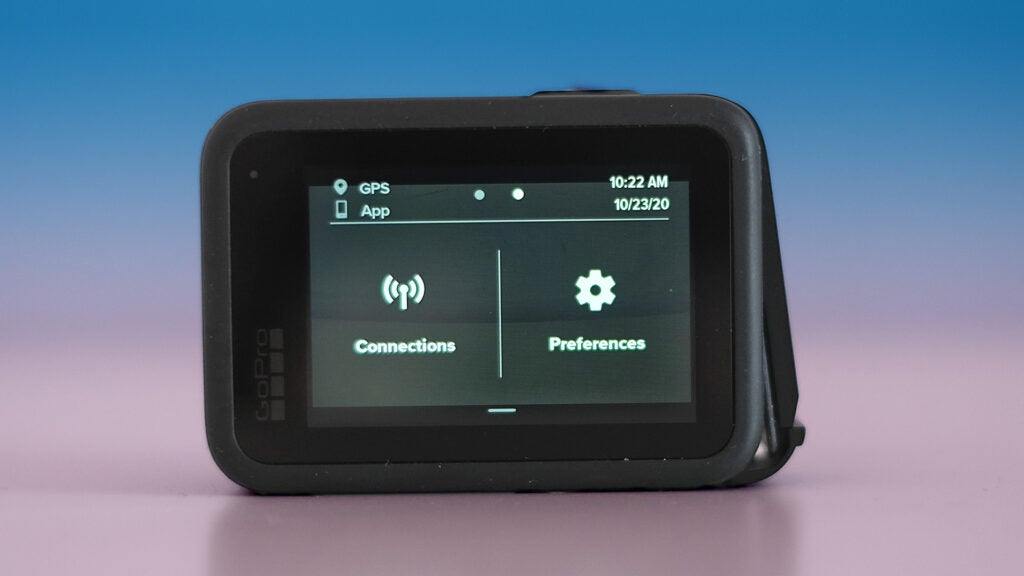 I never felt the GoPro Hero 8 Black’s rear display was too small. First using the GoPro Hero 9 Black is like going from a double bed at home to a King size one on holiday. A larger screen is not really an excuse for the larger shell, though, as there are still big blank expanses around the panel.

The front screen is great too. That’s important given it is the GoPro Hero 9 Black’s main new feature. While most of you will shoot 16:9 video rather than the 1:1 aspect here, you can choose whether the preview fills the space, or shows “real” shape with black bars on top and bottom.

Alternatively, it can act more like the GoPro Hero 8 Black’s front display and show the camera status. The front screen has no touch layer, which is for the best. 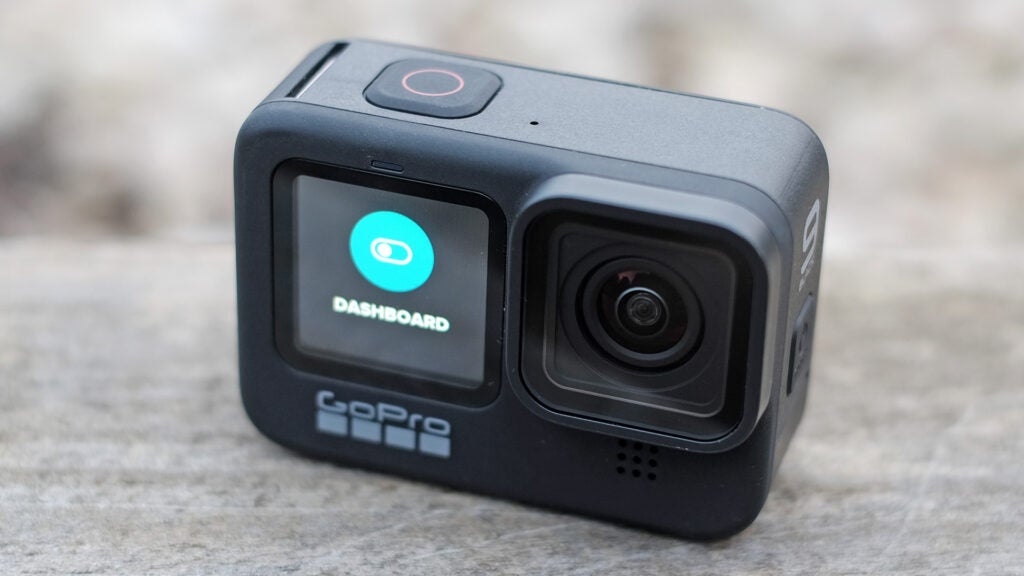 There are two little annoyances here. The GoPro Hero 9 Black has no Auto-Brightness setting. You have to dig into Settings to change the level. And the two displays’ brightness is linked. You can’t make the front screen subtle, the rear one bright, which makes me miss the subtle screens of older Black cameras.

The GoPro Hero 9 Black’s interface is much the same as the Hero 8 Black’s. It’s based around presets. A bunch of everyday ones are pre-programmed in from the start, but the GoPro enthusiast will want to bin them all and make their own, if only to rename them “dogcam”, “bikecam”, “family trips” and so on.

These presets specify things like the resolution, frame rate, stabilisation mode and field of view. They let you make your GoPro Hero 9 Black feel like your own. 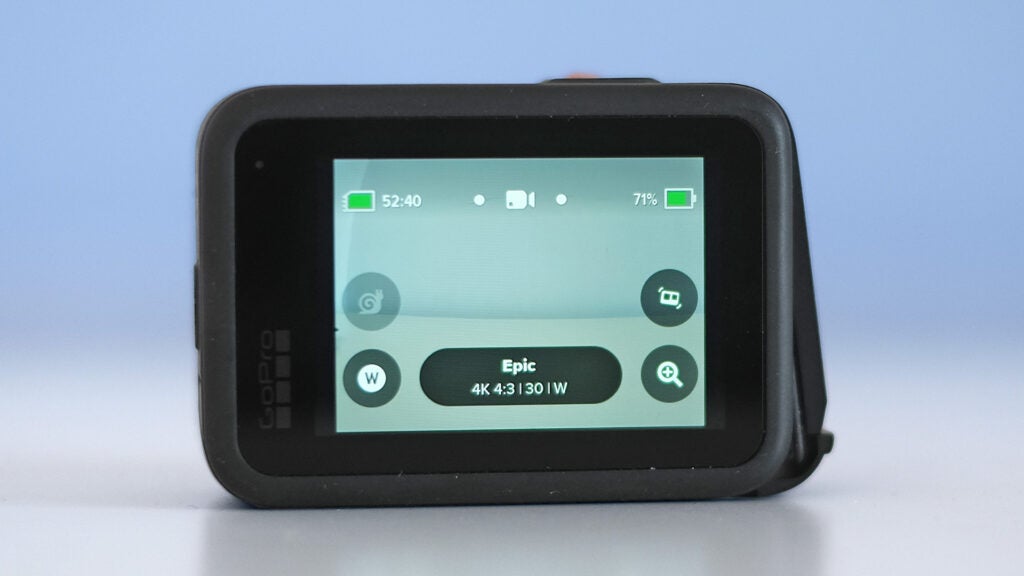 However, GoPro needs to give its interface a speed injection. That is hasn’t this year is disappointing. The interface can feel slow to respond. In the last few weeks I’ve had the mixed blessing of an opportunity to use a whole stack of $50-150 action cameras from tiny brands, and several feel more responsive than the GoPro Hero 9 Black.

Part of this is down to GoPro’s use of smartphone-like transition animations. But they are either not quite well optimised enough, or the processor isn’t really suited to this style of visual gloss.

There’s a counterintuitive bright spot here, though. The Hero 8 Black feels more responsive than the 9 Black right now, suggesting we’re only an update away from better performance. 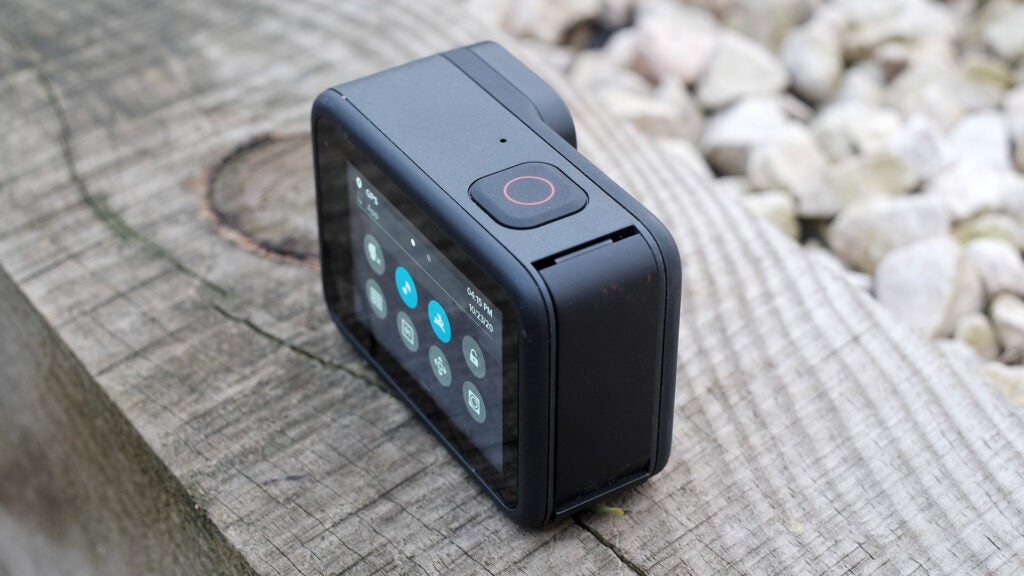 Image Quality – How does it compare to the Hero 8 Black? 5K vs 4K

5K video capture is one of the GoPro Hero 9 Black’s main improvements. This is made possible by a jump from a 12-megapixel sensor to a 20 megapixel one. 5K capture at 5120 x 2880 consists of more than 12 million pixels, and GoPro needs even more than this native resolution as it shoots 5K at a cropped “wide” field of view.

Right down at pixel level you can see some disparities. 5K renders fine natural features like far-away leaves better than 4K, meaning you have better scope to crop into the footage in post and avoid it looking like a cropped view.

However, there’s a more obvious difference in the processing. The 4K footage has greater contrast, and some more evidence of image sharpening in high-contrast edges, such as the skyline. The 4K clip also has less purple colour noise, although you’d only notice it in the 5K shot when you dig deep into the image. 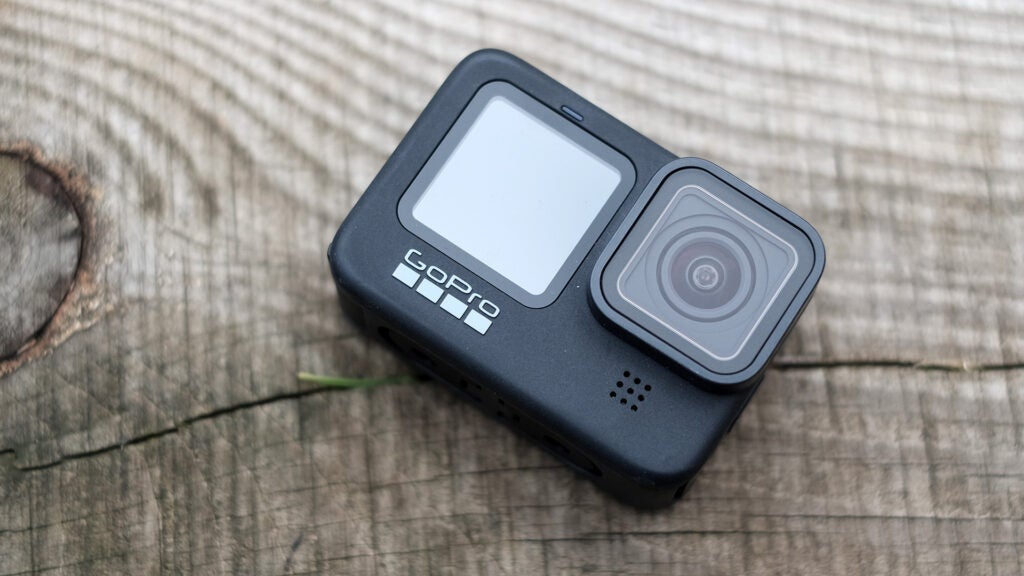 This comparison also typifies the 4K image character of the GoPro Hero 8 Black versus the 9 Black. The newer camera plays with contrast and sharpening a little more. Its videos “pops” more, although this style also tends to minimise some visual elements you might want to keep, like far-away fog. There’s also slightly more intense noise reduction than the Hero 8 Black, but it expertly manages to smooth out some colour gradations without an obvious reduction in fine detail or texture.

GoPro seems to have judged this shift to a slightly more crowd-pleasing image processing approach well. Let’s hope it doesn’t go any further.

The image-quality conscious can tweak some of this anyway. GoPro’s Hero 9 Black ProTune controls let you switch to a “flat” colour profile and reduce sharpness.

In most cases you’re not going to see a significant change in image quality in the GoPro Hero 9 Black, if you already own a Hero 8 Black. 4K footage brings no more detail than we see in that camera, and the 4K mode is really more practical than 5K for the average action cam owner. 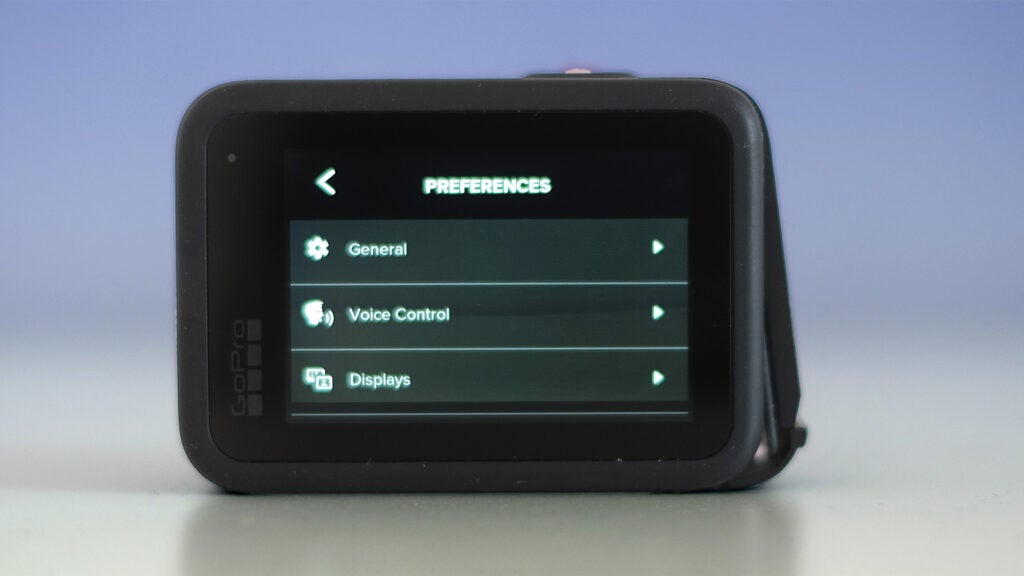 The top settings also require the use of the HEVC codec, and those files may not play properly on your laptop/phone if it’s an older model.

Low-light shooting is still fairly poor too, because the GoPro Hero 9 Black still has a 1/2.3-inch sensor. A small sensor with none of the low-light gymnastics used by some of the top phones means truly dim scenes reap borderline unusable footage.

In any other condition the GoPro Hero 9 Black is great, though. And the main takeaway in a Hero 8 versus Hero 9 Black comparison is deliberately increased contrast. 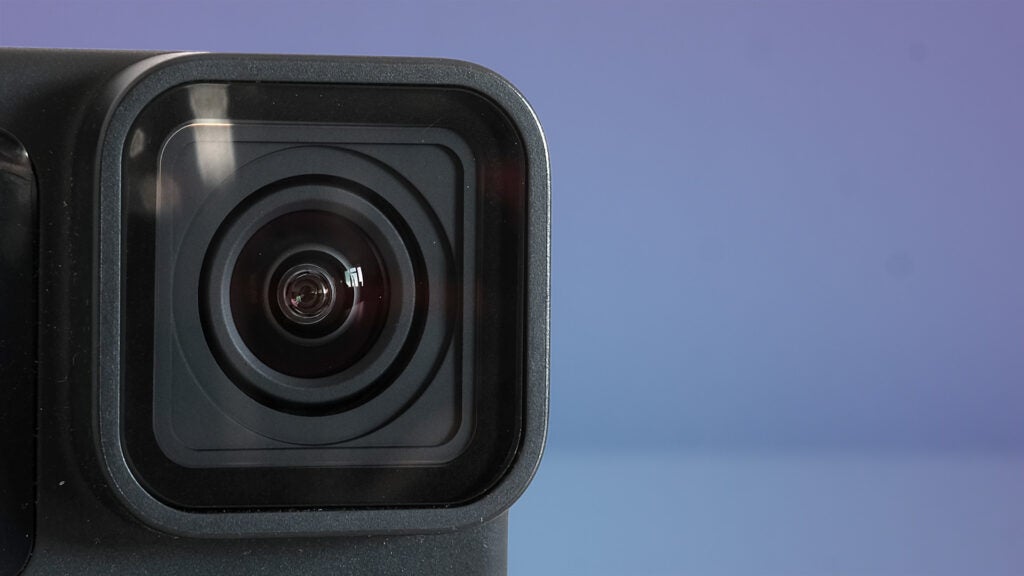 The camera also has altered image stabilisation, HyperSmooth 3.0 in place of HyperSmooth 2.0.

In most shooting scenarios you’re not going to notice much difference. I took them out for a run and, sure enough, when used in the “Boost” mode both provide unnervingly smooth footage. GoPro’s stabilisation was already so good, there was no obvious way to make it better without an internal mechanical gimbal.

The GoPro Hero 9 Black’s lens also has a slightly narrower field of view than the Hero 8 Black, which makes stabilisation harder to achieve.

HyperSmooth 3.0 only has a big effect when you switch to the Linear field of view, which lets you turn on Horizon Levelling. This keeps the, you guessed it, horizon level even when you roll the Hero 9 Black left and right significantly. It’s a stabilisation magic trick, one that came to GoPros with the 360-degree Max.

The Hero 8 Black can do this too, but only through the GoPro app. It’s in-camera this time. 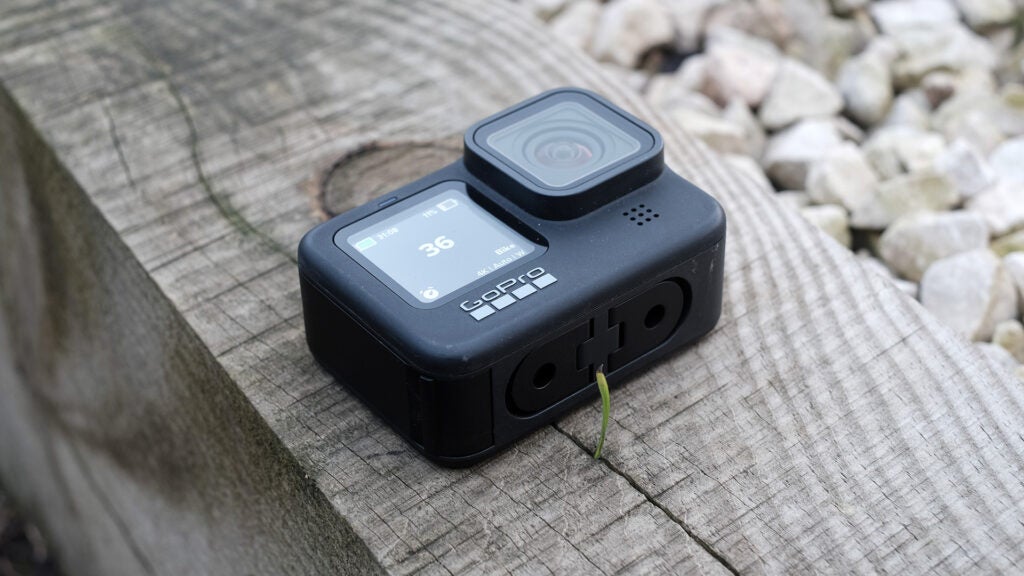 This is an excellent feature that lets you shoot professional-looking footage more easily. In indoor lighting you’ll see some blurring around the corners of the frame, caused by motion blur, but in a bright environment, it’s near-invisible.

Horizon Levelling’s effectiveness is not at Max level yet. When you hit around 45 degrees, the GoPro Hero 9 Black tends to give up and flop the image over. However, I can’t imagine the real-world scenarios I’d encounter where this would happen. Some of you probably will. GoPros are used in a million different ways.

Much like GoPro’s image quality, stabilisation was great last time. It remains great, without any mind-blowing generational changes. 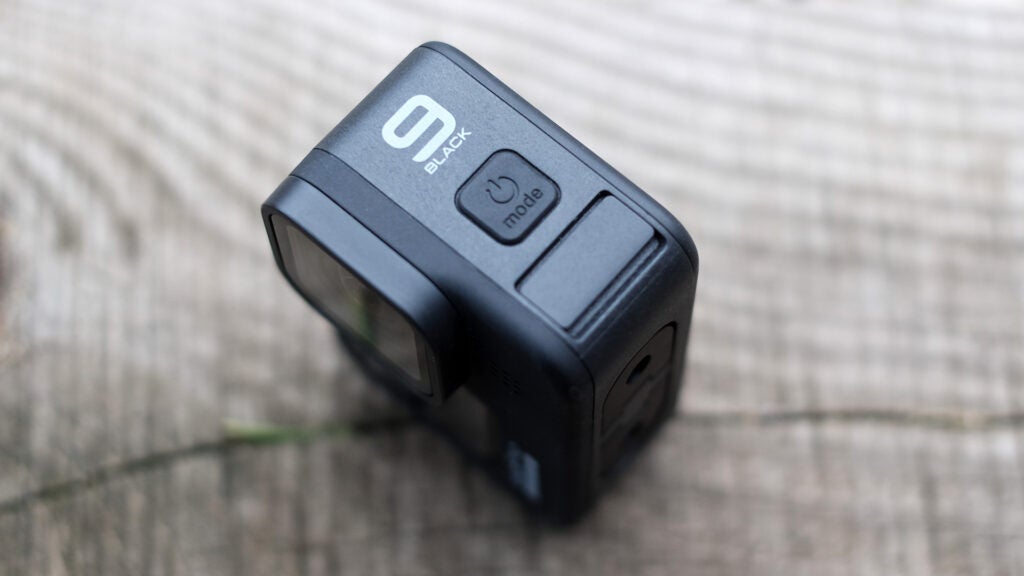 Battery Life – It lasts a lot longer than last time

The GoPro Hero 9 Black’s new battery will change how you use your action camera, though. It lasts a lot longer than last time.

GoPro says it lasts for 101 minutes of 1080p capture, a 30% increase over the Hero 8 Black. My observations are a lot looser, based around deciding to take the Hero 9 Black for a run/walk/weekend away an hour before doing so. But it holds charge very well and routinely has a good chunk of battery left when the Hero 8 Black runs dry. 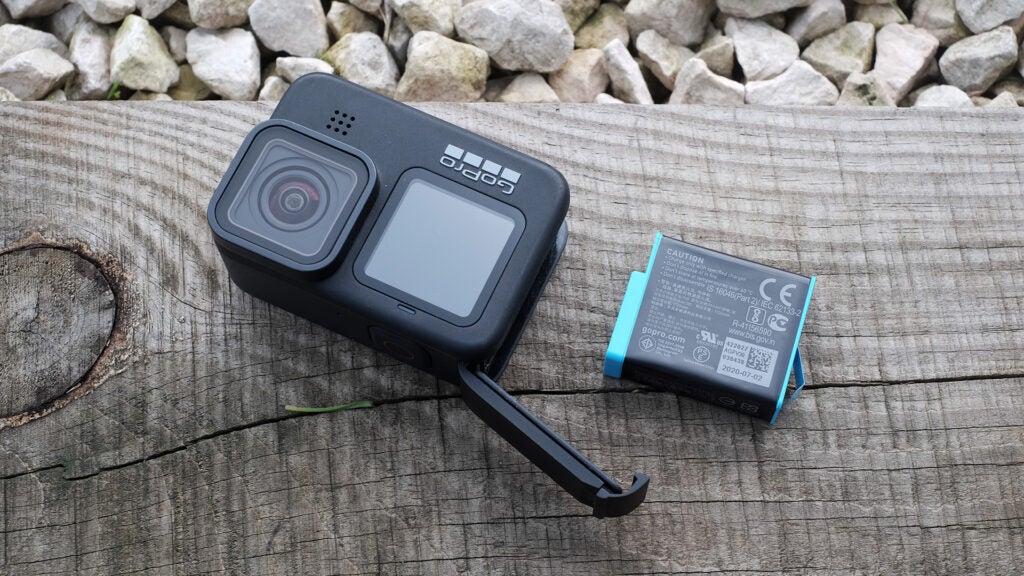 This comes with another annoyance, of course. It has a different battery, so the small stack of 1220mAh batteries you have from older GoPros won’t fit the 9 Black. It has a 1720mAh battery, physically bigger in every dimension.

Still, if GoPro hadn’t made this move we’d all be complaining it didn’t make use of that extra room in the casing. The Hero 9 Black does at least work with most other Hero 8 Black mounts and accessories (not the remote), so that’s something. 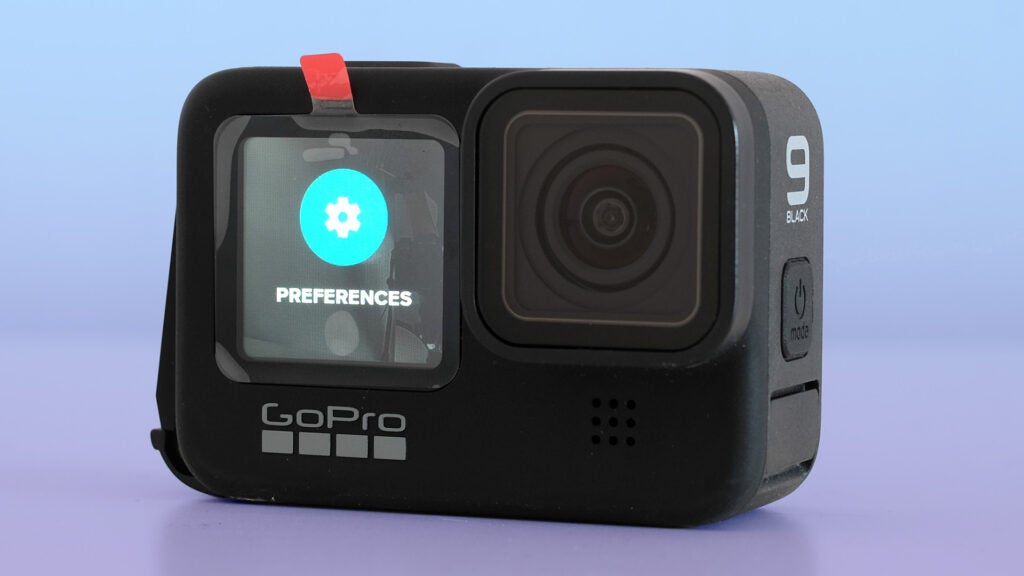 Should you buy the GoPro Hero 9 Black?

GoPro has moved with the times and made an action camera much more comfortable to use for vlog-style videos. You can compose your shot right there from the front screen, and horizon levelling adds even more pro gloss, if you don’t mind the cropped field of view.

There’s less need to pack an extra battery too, as the GoPro Hero 9 Black lasts longer between charges.
5K capture isn’t going to change how many people shoot, and the main image quality change we see here versus the Hero 8 Black is increased contrast.

Plenty of people should buy a GoPro Hero 9 Black instead of the 8-series. But if your reaction to a front display is “why would anyone want that”, a £150 saving may mean sticking with the older GoPro is the right choice.